Therapy        -       Golden Retrievers of Camelot House ~ Golden Retriever Breeder in Statesville, NC -45 minutes north of Charlotte, NC.
Our Mercedes
Mercedes began therapy work in 2015. In March,
we had the wonderful opportunity to meet and greet the residents and employees of Brookdale Peachtree Senior Living Solutions. What a delightful group of people! It was just as much therapy to Mercedes as it was to the residents. She was like a sponge soaking in every little bit of attention.
While at Brookdale, I allowed Mercedes to walk with her leash dragging. She went from resident to resident, sitting politely with her tail wagging relentlessly, letting each one pet her, almost instinctively knowing when to go to the next person. It was as if she knew which ones needed more time and when it was time to move on.
One resident who took a particular fondness to Mercedes was a man in a wheelchair whose hands were no longer able to move well, possibly due to a stroke or severe rheumatoid arthritis. When he saw Mercedes, his eyes lit up and his rigid hands reached out struggling to grasp Mercedes' coat working hard to pet the lovely creature. 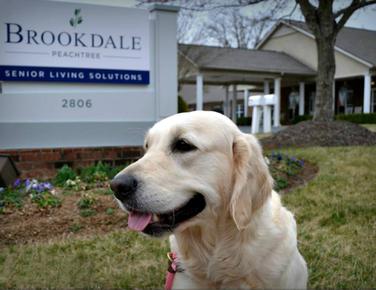 He also struggled to talk, but nonetheless was able to communicate through his body language, his smile, his eyes and some hand signals. In a precious moment, Mercedes from across the pond, my Serbian Princess, met this sweetheart of a man whose deeply lined face showed evidence of many years on this earth with a lifetime of memories, treasures and infinite stories.  During their brief meeting, both worlds connected.   The man was no longer bound by his limitations, but was able to move past them to form a special bond with Mercedes who saw no limitations. It was a time of mutual appreciation and affection. The picture of the two of them together will be forever etched in my mind.
The time spent with Mercedes and the residents at Brookdale Peachtree Senior Living Solutions was therapy for all involved, myself included. It is with great joy that I have begun the path of therapy work with Mercedes. Stay tuned for more stories of future therapy visits. Another glimpse into the heart of Camelot House! 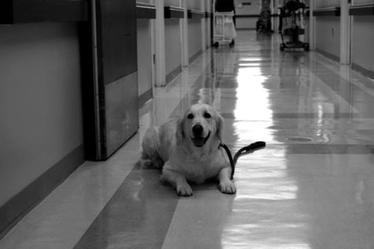 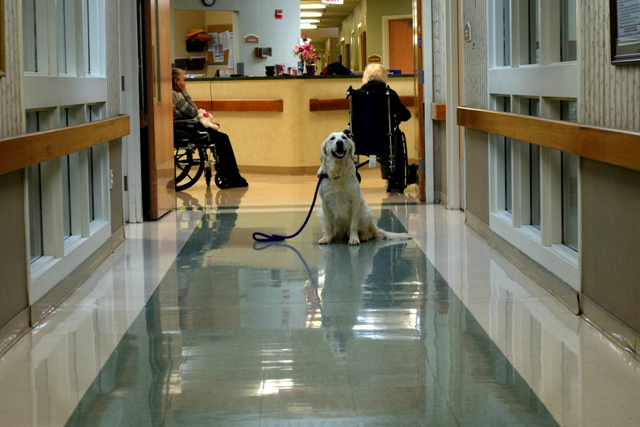 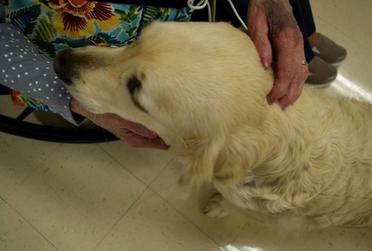 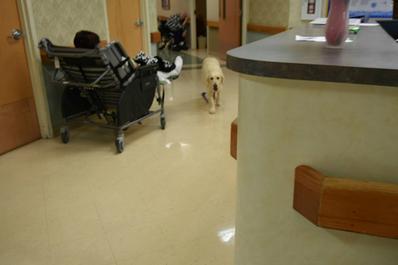 Residents of skilled living facilities light up during Mercedes' visits. On one visit, a nurse remarked of one patient in particular, "That's the first time he has smiled today." It did my heart good to see Mercedes making a difference in the lives of the elderly. Another glimpse into the life of Camelot House! 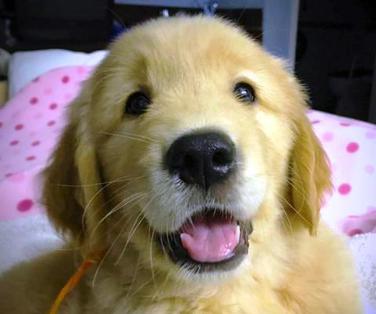 Denver, Daisy's daughter, officially began the path of therapy work in February of 2017. On her first day, she met a patient who was crying. Denver turned her around by just being her sweet little self. Denver is a favorite of the patients! What's not to love? 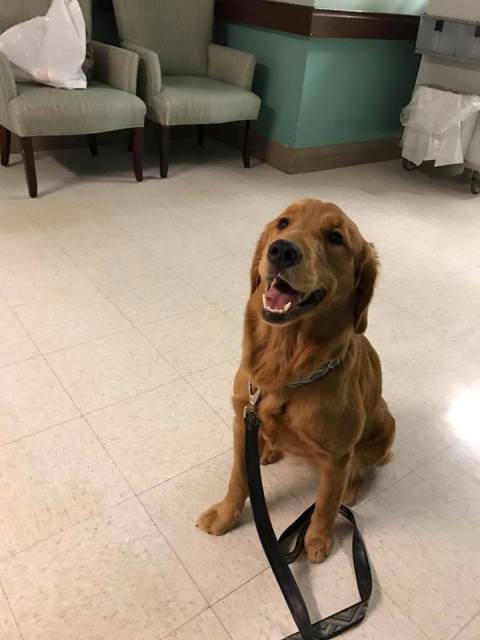 Wonder Boy Seamus Finnegan of Camelot House CGC
Finn brought much happiness to nursing home residents as a pup in August of 2017. He even received two kisses by one sweet lady! By one year of age, Finn had earned his Canine Good Citizen title via the American Kennel Club and had completed the first two levels of service dog training. He helps traumatized children in Washington DC as a Service Dog In Training, working with therapist Nicole Moore LGPC. 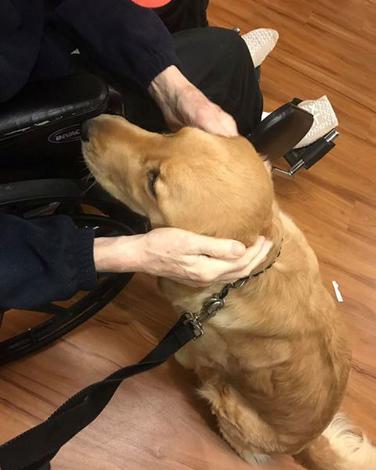 Poppy, a Daisy offspring registered with Therapy Dogs International, met a man at a nursing home in 2017. He teared up as he talked of falling and breaking his hip. His Labrador Retriever did not leave his side as he laid outside in the rain for six hours with a broken hip. Finally, a neighbor found him and called 911. His son was taking care of his dog while he recovered in the rehabilitation center. Poppy brought a smile to the man's face for a few brief moments. Yet another of many, many wonderful connections with the elderly. ​ 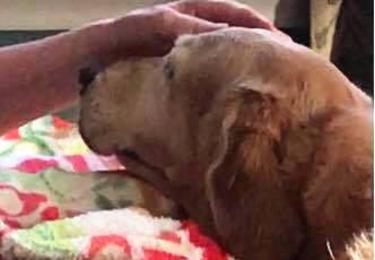 Daisy began the path toward therapy dog training in 2016. One elderly person in particular had never been one for indoor pets, nor had she ever had any interest in dogs. Regardless, Daisy won a place in the sweet lady's heart where the lady actually started calling Daisy to her, reaching out to pet her and, one day, even sang an old classic about Daisy that had the words, "Daisy, Daisy give me your heart to do...." Daisy was a wonderful source of therapy for a very special lady, who has since passed away. "On A Bicycle Built For Two" has become Daisy's song. ​ 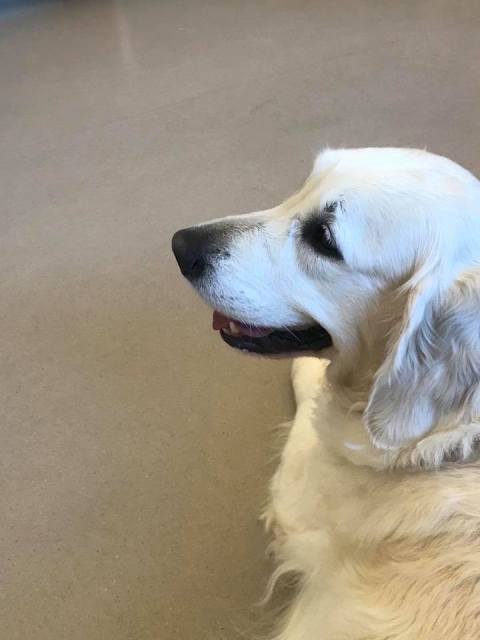 Once, while at the vet with Mercedes, a couple came into the waiting room with tears in their eyes. Their dog was in the back due to an emergency situation. They did not divulge the nature of the emergency, but they were noticeably upset.
Mercedes, our girl with the innate sense of people in need, went straight to them pressing her body against them both at the same time as if instinctively knowing physical touch or light pressure would help. They both loved on her through their tears. She stayed with them until she felt it was okay to leave. They seemed comforted, even if it was a small measure, by her being there.
There were other people in the waiting room that day, but Mer was only drawn to that specific couple. I’ve seen Mercedes do the same thing in nursing homes. I believe she is pretty good at reading people; therefore, I tend to trust her lead. Mer, a therapy dog with a heart of gold!
Time spent with the elderly is very special. The gift of time, kneeling down to see the patient eye to eye, listening, a sweet lovable gentle dog, and music therapy have all been part of my visits to nursing homes where life seems to stand still and, oftentimes, patients are lost in time. It can be a very sad place if you don't take time to peel back the layers and see the hearts of the gentle souls.
I asked a lady one time if she worked earlier in life. She told me that her job was to make people happy. What a sweetheart! I have, oftentimes, wanted to write a story on each person so everyone would see them and really know them. Maybe someday.
I have seen elderly patients crying in wheelchairs or calling out for help and being ignored. I once saw a lady lying so very still in a quiet, empty, dark room with no decorations, all alone. I learned that she passed just a week later. So sad. 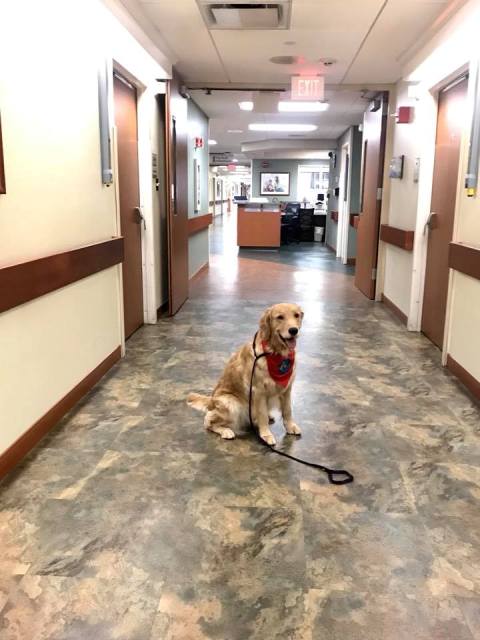 Is there a way to bring joy to such souls? Absolutely! The gift of yourself is desperately needed. Expecting an RN to care for 40 to 50 patients per shift or a CNA to care for 16 patients per shift is absurd. Did you know if someone calls in sick that the RN's or CNA's work is doubled?
The need for skilled living facilities is understandable when a family is no longer able to meet the needs of their loved one. Unfortunately, although the facility can more easily meet the physical needs, the emotional needs are critical. Those can make or break a person. 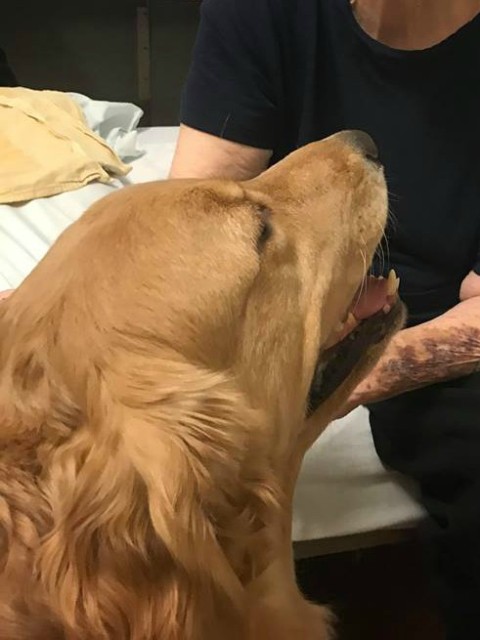 I've been in facilities at Christmas when many groups think of the elderly. Christmas caroling is divine, but what about the other 11 months of the year? We, as a society, are letting down our elderly, the most needy of all. There is a real need in our communities that we can meet and that is simply just visiting the elderly in nursing homes and giving the investment of our time.
Some of my sweetest, most precious times have been spent with folks with dementia. It is so important that they know they are important, revered and loved, not a burden, ignored or forgotten. They are still people! This is where my heart has been for a few years now. My prayer is that we will make a change for the elderly.
"Cast me not off in the time of old age; forsake me not when my strength faileth." Psalms 71:9
Therapy Dogs International - TDI